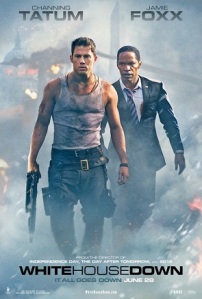 Capitol policeman John Cale (Channing Tatum) has just been turned down for his dream job of becoming a Secret Service Agent, protecting President James Sawyer (Jamie Foxx). In an effort to avoid letting down his somewhat estranged, and potential political enthusiast daughter, Emily (Joey King), he takes her on a tour of the White House to show her where daddy’s new job will be. During the tour, the White House falls into the hand of a heavily armed and military trained group, whose aim is to kidnap the president and gain control of the building’s vast arsenal of weapons. As the Capitol Dome explodes into a ball of fire, Cale must rise to the occasion, it’s up to Cale to rescue the president, his daughter and save the world.

While most critics are comparing early summer Blockbuster to Gerard Butler’s earlier summer release of, Olympus Has Fallen, I left the theater feeling like I had just watched a Die Hard movie. It is filled with guns and muscle and a story line that no one believes could actually be true. A plethora of cheesy one-liners got the audience laughing and clapping at all the right moments, and I was actually looking for the moment when Tatum would utter those famous “Yippee-ki-yay” words. Unfortuntately, they were never heard.

Our John McClane this time around is named John Cale, who bears a striking resemblance to his predecessor in his wife beater and black pants. He never has enough bullets and kills all, except for 2, of the bad guys with little effort.  Similarly, the backs-story on our hero is that he has muddled through life, doing the bare minimum and of course, ends up being in the wrong place at the wrong time, with his daughter in tow. Soon buildings are exploding and the hostages are taken, including Emily, by the leader of the militia group Emil Stenz (Jason Clarke). But is he really the leader? I can’t spoil that for you…

The entire idea of this movie is completely unbelievable, which is thrown in your face by the unconventional way that the Secret Service supposedly hires the men and women to protect our leaders. The thought that floated through my mind was they hiring a new cashier at Wally World? Special Agent Carol Finnery (Maggie Gyllenhaal), not only interviewed Cale just before all hell broke loose, but is also Cale’s old college girlfriend, and was never really able to depend on him. She Fulfills a favor request by “interviewing” Cale, which she then emasculates by supplying us with a laundry list of his screw-ups, incompetence and inability to live up to his potential. All the while another agent stands snickering in the background enjoying the show.

Among other characters in this Die Hard throw back are a rather old-looking James Woods as Martin Walker, head of the White House Secret Service detail, who it is obvious early on, is not there just to smile when he gets a cake to celebrate his upcoming retirement. Walker’s protégé and would be successor Finnerty, Finnerty ends up as Cale’s contact to the outside world, so think of her as the movie’s female version of Sgt. Al Powell (Reginald VelJohnson). Other authority figures who have important roles in the movie’s climatic parallel consist of resolute General Caulfield (Lance Reddick), Vice President Alvin Hammond (Michael Murphy) and Speaker of the House Eli Raphelson (Richard Jenkins).

Of course, there’s one more major player, and that’s the PoTUS himself, James Sawyer (Jamie Foxx), an academic scholar that quotes Lincoln and buzzes by the Lincoln memorial in Marine One, every time he wants to “do the thing”. His uncanny resemblance not only physically, but mentally to the current PoTUS, By the end of the movie, the President has turned into an unlikely action hero firing machine guns and rocket launchers.

With the movie closely following the Die Hard script, it is full of hand to hand combat in confined spaces, epic blowup sequences; it is rooted by Tatum’s recession plagued hero with flaws and Foxx’s damsel in distress PoTUS character.  It is fun in a dopey way, but the cat-and-mouse game goes on a little to long for my liking. It is the epitome of an action movie that is certainly not real life.

If you are ready to kick off the summer of blockbuster, high budget movies, this is the one to see. However you have to be able to overlook its outlandishly unbelievable story line. You will leave shouting, there’s no way that could happen and yet laughing when the President yells, “Don’t touch my Jordans!!”

3 thoughts on “Does White House Down “Die Hard”?”